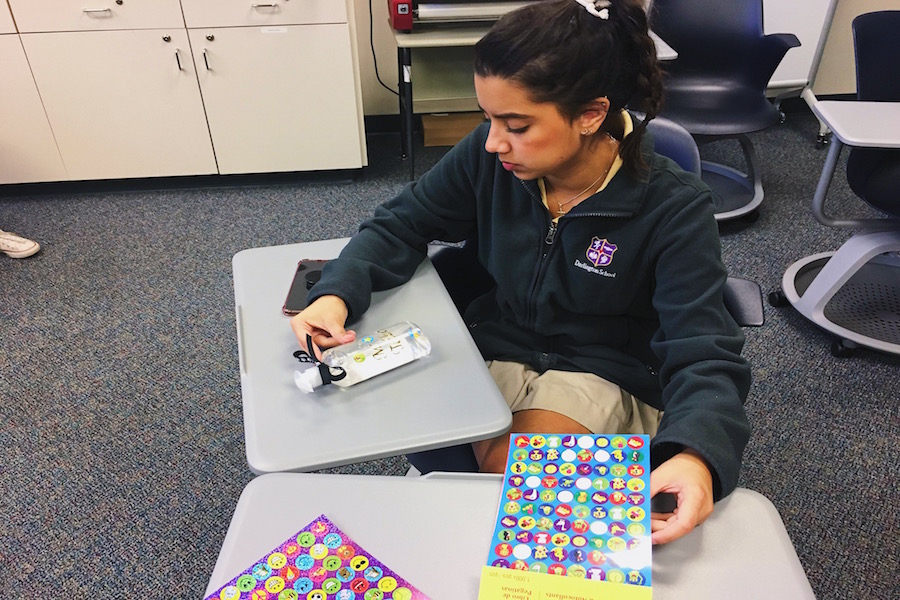 A majority of U.S. schools have extracurriculars, but most of them take place after school or as a class. At Darlington, iPeriods are incorporated into the daily schedule taking place as 50 minute blocks. A student has two different iPeriods per week and they each meet twice a week.

“I like iPeriod because it gives me a chance to do something else that I wouldn’t normally get to do in school. It is nice to have a part in the school day that is stress free,” junior Grace Wagshul said.

Some reasons that iPeriods are beneficial are that they give students an opportunity to explore interests that are not offered as a class. Also, it is a time to meet new people who have the same interests as you.

“I like iPeriod because it gives me an opportunity to explore my interests during the school day as opposed to after school when I’m really busy,” sophomore Leelee Barnes said.

Another benefit of iPeriods is that it is conveniently placed after second lunch which gives the opportunity to relax after a busy day of classes before going to another class.

“I like iPeriod because for me it’s a way to escape classes for 45 minutes and it’s for you to do something you’re interested in that you can look forward to,” sophomore William McClain said.

iPeriods should be an essential part of every school’s curriculum. At Darlington, the students sometimes will sponsor an iPeriod that they believe in and will run it too. iPeriod is a time for students to unlock their creativity and learn more about the world.

IPeriod was designated to be a time when students and faculty could engage in and explore other subjects that they are passionate about beside school work. Every Upper School student will participate in a variety of  iPeriod initiatives throughout the school year. They are required to take two iPeriods for each quarter, and each will meet up twice a week. However, some students have argued about whether iPeriods are beneficial for them.

Many students are required to take mandatory iPeriod labs for AP classes  this year, and junior Hayden Baldwin is one of them. It makes her feel forced while iPeriods are supposed to be more freeing. She thinks that it would be better if this period sticks to its original description as a time for students “to take intellectual risks, without the pressure of grades.”

“Last year, I loved getting to choose different things to do during my iPeriods that I wouldn’t usually try. This provided an interesting break in between my normal classes,” Baldwin said. “But this year, it is a different story. I am being required to take two iPeriods that correspond with classes I am already taking, and I don’t think this is fair to make students take 50 minutes more of a class when they are already in that class for 70 minutes.”

She thinks that iPeriods should be exactly like how they were introduced to the students.

“If you are going to continue to have iPeriod and call it iPeriod, then it should be just that, an independent period for students to try new things. Otherwise, it’s just another class, which is fine but don’t try to call it something that it’s not,” Baldwin said.

Due to the change of iPeriods each quater, some students thinks that they do not have a lasting effect on them.

“I honestly would prefer to be able to sleep 45 minutes later or even get out earlier. I feel as though iPeriods are a waste of time and are pointless,” junior Emily Brandon said.

Junior Aaryn Ijames also has the same opinion toward the length of iPeriods.

“My opinion towards  iPeriod is that for the most part they are unhelpful and time-consuming. While there are interesting iPeriods, I think every students has gotten stuck with an iPeriod they have no interest in and feel as though it is an unproductive time of day,” Ijames said. “I feel like because we only have one time of day where all of the students have free time which is office hours, it makes working on group projects difficult and encourages us to socialize rather than talk to teachers because that’s our only free time”.

While most students do not want to completely eliminate iPeriods, they do have suggestions on how to improve them.

“Things that could make iPeriod better are a more careful placement of people in iPeriods. For example not having them as frequently, maybe having them twice a week rather than four times and leaving the students time to interact and work together” Ijames said.