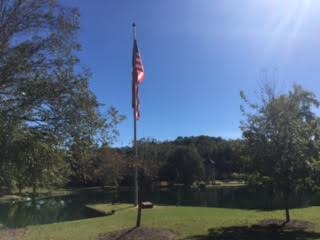 There has been a building controversy about NFL players kneeling, sitting and linking arms during the national anthem before each game. This protest is about police brutality on African Americans in our country. This issue really heated up during week three of this NFL season with a substantial amount of players kneeling, sitting or even holding their fist up in the air, while some teams elected to not even come out during the anthem. This is very disrespectful move by these players because they could pick any other time to protest or speak out, but they chose the time when we’re all supposed to stand in unity as a country for our anthem and flag.

There was one player that I respected the most last Sunday, U.S. Army veteran Alejandro Villanueva, who went against the Pittsburgh Steelers’ idea of staying in the locker room during the national anthem. Villanueva was the only player on his team to come out of the locker room and stand for the national anthem, most likely because he has fought for that flag and understands the importance of standing for the anthem.

Many teams and coaches chose different ways of protesting the anthem. One lowlight was Buffalo Bills running back LeSean McCoy continuing to stretch while the anthem was being played, a big sign of disrespect. I had a lot of respect for McCoy, and I thought he was a great player, but this act of blatant disrespect definitely made me think less of him.

The argument can be made that kneeling is the players constitutional right and freedom of expression, which it most definitely is; however, it doesn’t mean that it isn’t disrespectful. Anyone has the right to say rude, racist or hurtful things, but that doesn’t mean that it’s acceptable.I also don’t think they’re accomplishing anything by protesting,  I would argue that it actually making things worse by making more people more divided and also driving NFL ratings down.

These athletes could use their platform to actually make a difference instead of literally sitting and doing nothing. I think that by week four or five, most players will be standing for the anthem. I am perfectly fine with players discussing their disapproval of our nation during a press conference, but when that anthem is played and our attention is to the flag, it is a time for everyone in our nation to come together to respect our flag and what our country stands for.

I just hope that for the sake of our country, the stars of the biggest professional sport in our nation will come to the realization that standing and respecting our anthem is part of being an American. Players could come together and form a peaceful protest during the week or just share their opinions during their press conferences, but not during the anthem. Pride for your country should come before a protest.

Many Americans are outraged at Colin Kaepernick and other athletes for kneeling during the national anthem in an act of peaceful protest against police brutality; however, where is that same chauvinistic indignation towards the instances of racial injustice that initially sparked the protest?

Standing for the flag doesn’t make you patriotic, loving your country enough to go to the ends of the earth to implement change does. Football quarterback Colin Kaepernick began the protest in 2016 in opposition to the oppression of black people and police brutality. Our country is hurting, and athletes are taking a knee as the first step towards healing it.

This protest has never been about President Trump, our flag or our national anthem. It’s goal has always been to peacefully protest police brutality and racial discrimination. It is much larger than taking a knee; it is about taking a stand. During the Civil Rights movement, Rosa Parks did not refuse to move because she hated the bus; she refused to move because she was defending her rights. Reframing the argument to a debate about the national anthem and exploiting the service of our veterans only works to silence the voices fighting against police brutality.

The stars and stripes of the American flag are supposed to represent the ideologies that our troops overseas and at home protect. This country was built on the premise that all men were created equal, yet Black bodies are treated as though they are disposable and officers perpetuating police brutality continued not to be held accountable. Black veterans risk their lives in far away places to fight for this country, only to return home and not receive the full liberties they have put their life on the line for.  Standing for the flag doesn’t make you patriotic, loving your country even when it doesn’t love you back does.

Next Fourth of July, as you wear your American flag bikinis, throw away your American flag paper plates and disrespect the flag for no greater reason than satisfying the needs of your Bald-Eagle themed party, please remember that patriotism isn’t standing for a flag; patriotism is taking action to make this a country where everyone wants to stand.