An Open Letter to the National Socialist Movement 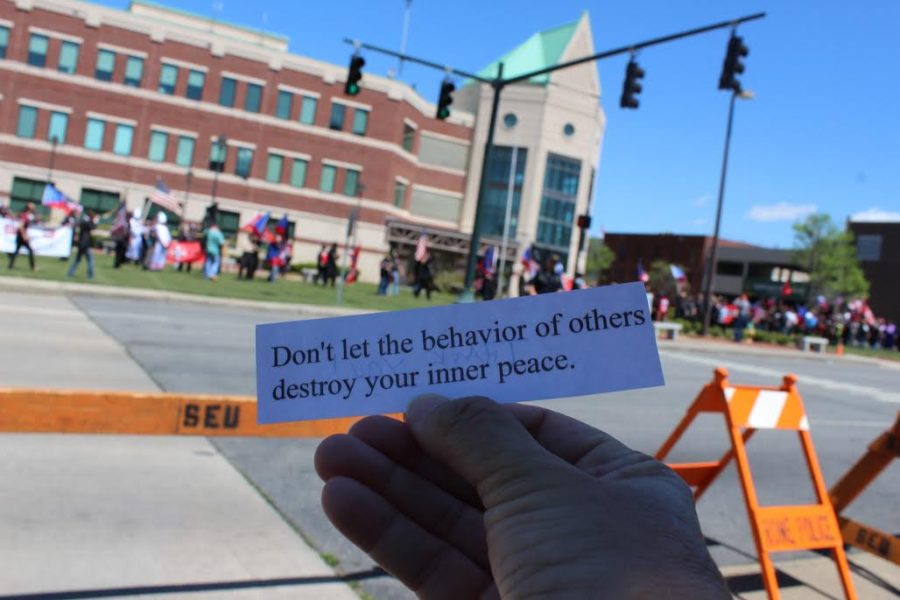 Despite the violence in Stone Mountain, we were determined to have a peaceful silent protest and get out a message of love, unity and diversity. We did not want to become a headline or a hashtag, so by accepting our T-shirts, we agreed to stay silent. Yet, through my silence, I couldn’t help but think about all the things I wish I could have verbally articulated, which is why I am writing this letter.

This is my open letter to the National Socialist Movement.

As a child of immigrants, I attended the counter-protest with strong background knowledge of the National Socialist Movement’s hypocritical views on immigration. The National Socialist Movement’s core beliefs include preservation of European culture and heritage, yet in the same breath, preach reform of immigration policies. As I stood in the face of you self-proclaimed white liberators, listened while you chanted, “diversity is white genocide,” and cringed as hate speakers described how the white American race is being adulterated by immigrants, it took all my self-control not to verbally communicate the fatal flaw in your prejudiced propaganda. To be of European descent while also being an American, your ancestors would have had to immigrate into this country, thus making you the descendants of immigrants. I wanted to give you all a history lesson detailing the disease and genocide your European ancestors brought to those who originated on this land, leaving only specks and traces of what once was, what was originally American. Henceforth, I wanted to note that your ancestors are guilty of the same evils of which you falsely accuse immigrants today.

As a teenager, I attended the counter protest with the prospects of an aspiring activist. I wanted to exercise my rights and stand up to make a change because young people do not get the opportunity to do this very often. Often, young people are silenced by adults, taught to have ambition, but only a safe amount. However, the “Turn Your Back on Hate” protest had a far-larger amount of young protesters than old, truly reflecting the new generation of “woke” teenagers emerging. While arm-in-arm with my peers, I wanted to challenge you oppressors to look at your demographics. I looked across the police barricades to the other side of the street, and it was a sad sight to see. Your rally-goers sagged of old age and stress wrinkles only years of perpetrating hate could bring, while the bright, glowing juvenescence of the counter-protest was absent from your rally. The National Socialist Movement is a candle that is soon to burn out, while the youth who represent love and unity are a flame that is still steadily burning.

As a black woman, I attended the counter-protest ready to take the torch for the fight for liberation that has been passed on throughout history from slavery, to the civil rights movement, to the “Black Lives Matter” movement today. From a very young age, I was taught that the day would come where I would encounter racism and have to deal with the struggles of my predecessors. However, not all are informed of the ongoing black struggle, and many of my white friends were shocked that groups like the National Socialist Movement still exist. As I came face to face with members of the Ku Klux Klan chanting and screaming, “Black lives don’t matter,” I surprisingly wanted nothing more than to thank God. I wanted to thank God for sending you to Rome, Ga., and for opening the eyes of the people in the local community. Many people believe racism is a sham or an excuse used by black people for misfortune brought upon by themselves, and these people refuse to acknowledge racism because they haven’t experienced it. I thank God that these same people had the opportunity to see racism and hatred first-hand and had the courage to stand up against an issue that they could’ve just as easily brushed off.

In my final moments of silence as we turned our backs away from your rally, I wanted nothing more than to scream, “I FEEL EMPOWERED, I FEEL CHANGED AND I FEEL LIBERATED,” because that is the only way to describe the feeling of turning my back on your hate and walking straight into the arms of love.

I’ll think about signing it sincerely,

Comments are welcome, but must be accompanied by your full name, not a username or pseudonym. All comments are moderated by the Darlingtonian staff.
All Darlingtonian Picks Reader Picks Sort: Newest