Protesters Turn Away from Hate 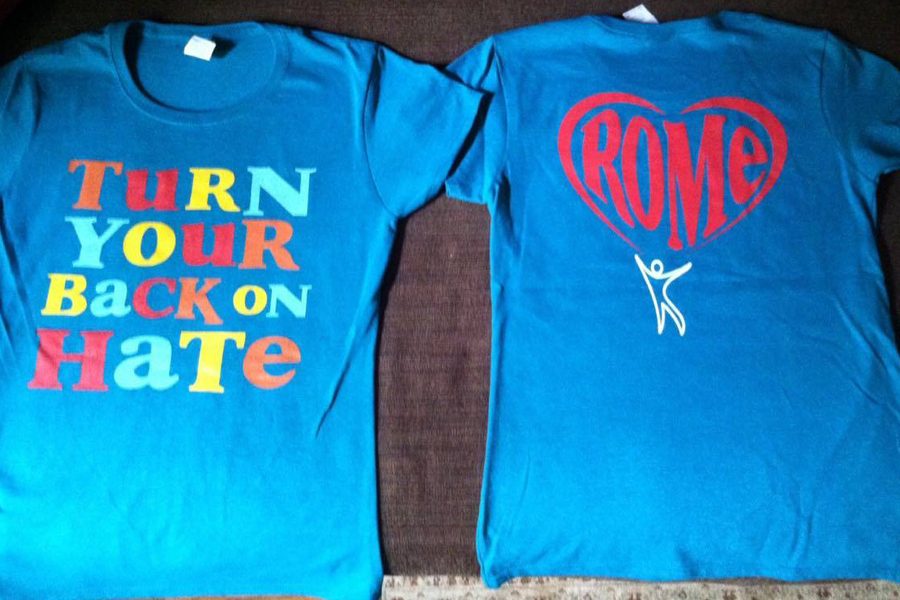 Romans will turn their backs to hate in silent protest of a white-rights rally this Saturday.

The National Socialist Movement and at least nine other white-pride groups will hold a solidarity rally to encourage white pride and traditional Aryan values in America at the Rome police station Saturday, April 23 at 2 p.m.

“We are a political and civil rights organization, and we prefer the term National Socialist to Nazi,” Brian Culpepper, NSM public relations, said. “We’ve done rallies all across America. We’ve never been to Rome, Ga., before, but our support base is growing all across northwest Georgia, so we thought it would be a good place to speak to the public.”

The Detroit-based NSM identifies itself as a part of America’s National Socialist Party. On its website, the group touts itself as the “political party for every patriotic white American.” The NSM also claims to work toward combating what it sees as threats to the American way of life, such as immigration and intrusion on European values by cultural incursions. Membership is open to “non-Semitic heterosexuals of European descent.” When TheDarNews reporters reached out to the NSM, they heard the voicemail linked on this page as a Soundcloud file.

The rally will be met by a community-organized silent protest from 1:30–3 p.m.

“My first response was that I felt nauseated,” said protest organizer Jessie Reed. “I’m a social worker, so I’m in the business of helping people who don’t have a voice try to speak up. I grew up in this town, and I love this community, so it made me really sad and disturbed that the rally was happening. We tried to create something that would be highly organized and peaceful, and a silent protest is what came out of it.”

“We’re going to be on the other side of the street with four lanes of traffic in between us,” Reed said. “So, if high school students want to come, I would encourage them to come, but stay toward the back. Also, join the Facebook group.”

Pediatric doctor Raj Miniyar, a local business owner, is organizing the Rome Unity Festival in Ridge Ferry Park at 3 p.m. on Saturday, where the protesters are walking after they leave the rally. The festival is a free event, and Miniyar is the father of Darlington freshman Ram Miniyar.

“My dad did the festival as a response to the neo-Nazi rally that was planned in Rome,” Ram Miniyar said. “He was surprised by that, and he couldn’t imagine why someone would do such a thing, and why it was in our community, so he wanted to organize a festival where all people of Rome could come together, communicate and have a great experience.”

“People try to label us as a hate group and as a neo-Nazi organization,” Culpepper said, “but all of America needs to remember that the NSM was the only pro-white group to be invited to a summit on race relations sponsored by black civil rights leaders that was held in Beverly Hills, Calif., in 2014, so we have a long history of working together with the pro-black groups in America and other nationalist groups to find solutions to issues that concern us all. On a global scale, the entire white race is under threat of extermination. We hope that people listen to our political platform, which is much broader than simple race-based issues. We hope to build a true third-party position in America, a nationalist position that puts the long-range interests of America first.”

However, not all people view the NSM as upholding these values.

“I think that the protest is fantastic in that it is designed to be non-combative,” senior Mary Margaret Wright, who plans on attending, said. “Not only does it help participants remain safe, but it also is a way of demonstrating that we are above the bigotry and hatred that the white-rights group preaches. The leaders of the group thought that Rome would be a good place to meet and spread their vile message with little opposition, but the protests are a peaceful way of proving they are wrong with love, which is what the group is lacking.”

Questions can be directed to Reed directly at (706) 622-0771, and stay tuned to the Facebook group for updates and specific plans. Participants are asked to RSVP on Facebook. To get a shirt, donate here and list the requested size in the comments section on the GoFundMe page. Shirts will be handed out at the fountain on West First Street and West Third Street. Donation proceeds benefit the Boys and Girls Club in South Rome. A map of the events in downtown Rome can be found below.

One Response to “Protesters Turn Away from Hate”

Comments are welcome, but must be accompanied by your full name, not a username or pseudonym. All comments are moderated by the Darlingtonian staff.

If you want a picture to show with your comment, go get a gravatar.