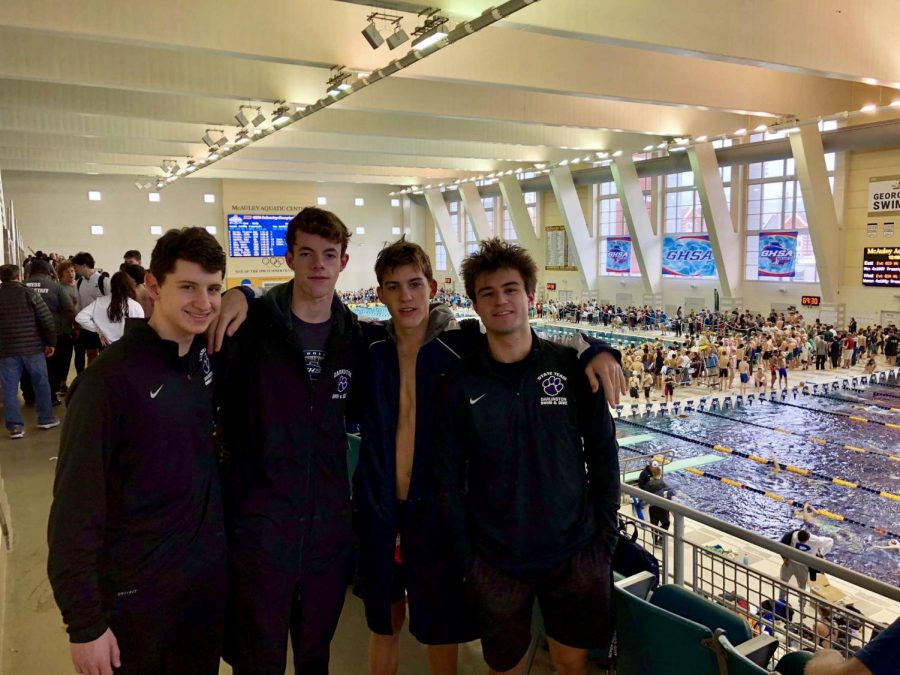 The varsity boys swim team earned a spot in the State Preliminaries for three different races: the 200-yard freestyle relay, the 100-yard butterfly, and the 100-yard backstroke.

After a rollercoaster of emotions at their last regular season meet at Adairsville, the team was able to do a time trial as a last chance effort to qualify for state after having been disqualified for an early start.

“We’d be at practice every day and have 20 minutes of purely practicing transitions for the relay, which we were five seconds off the state cut time for. We basically put all hope in the Adairsville meet,” Yearout said.

They were originally ranked 59 out of 64, but jumped 12 places and finished 47 out of 64 in the state preliminaries. Unfortunately, only the top 30 were able to compete in the finals, but they were only one second off of the school record.

“Our relay team performed very well at the state meet. We dropped 2 seconds off of our seed time and we all swam great,” Shadday said.

However, Yearout qualified for both of his individual races. He finished first in his heat with a time of 54.72 for the 100-yard butterfly, placing 12th in the A-AAA division.

“I am proud of the support the team showed each other this season. We had a great team community and a lot of leaders on the team that helped to create a competitive but supportive culture. A lot of our swimmers stepped up to swim events that were out of their comfort zone in order to help the team, and that definitely helped us win some meets this season,” head coach Leigh Hadaway said.

Yearout also finished fourth in his heat with a time of 57.14 for his backstroke, again placing 12th in his division.

The state meet was the final event at the end of a successful season for the varsity swim team.

“The team has made so much progress since the beginning of the season in both improving as athletes, but also in creating a strong team community. There were a lot of technical things that needed to be fixed on the team and everyone was eager to lock in and make those improvements. The bar was set high this season and I am impressed with how the team stepped up to the challenge,” Hadaway said.