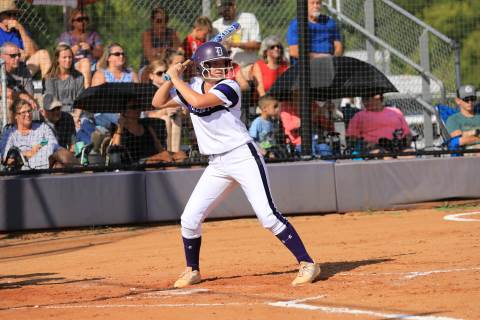 Following a loss to Cartersville, the team spent the week preparing for the game.

“Before the game we were all really pumped and had great energy. We had spent the week practicing hard for it,” freshman Belle Brooks said. “We just lost to Cartersville, and we wanted to play to redeem ourselves.”

The game started off strong with the Tigers holding Gordon Lee to zero runs.

“In the first inning, we didn’t let Gordon Lee score any runs, which was great. We also had some really good plays that kept them from scoring. We really worked hard, ” sophomore Evie Shadday said.

Though towards the end of the game, the team felt they slowed down.

“At points in the end of the game, there were times where we could have done better and held them back a few runs. We got in our heads about how much we were losing, and it made it harder for us to play well, but still we fought and tried our best,” Shadday said.

Overall, the girls felt they played well and have grown more as a team.

“We did good considering we are a team who had our first official practice four weeks ago,” senior Lily Fowler said. “It’s hard to come out and play with teams who have been together for a long time, when we have girls who just started playing a month ago, but we have grown so much from when we first started out, and I’m very proud of the new players.”

“It was a lot of mental mistakes that we shouldn’t have made and that if we can fix, we can get a lot better. I feel like if we fix those, we could compete with any team,” Brooks said. “We just need to work together and play to win.”

Despite the loss, the Tigers feel they can take away a lot from this game.

“We know now we have to go out and work hard and grow better than we were last game. We need to focus on connecting more as a team and having fun,” Fowler said. “Working on not letting the score get to us, and focusing on winning the next game is important for us.”