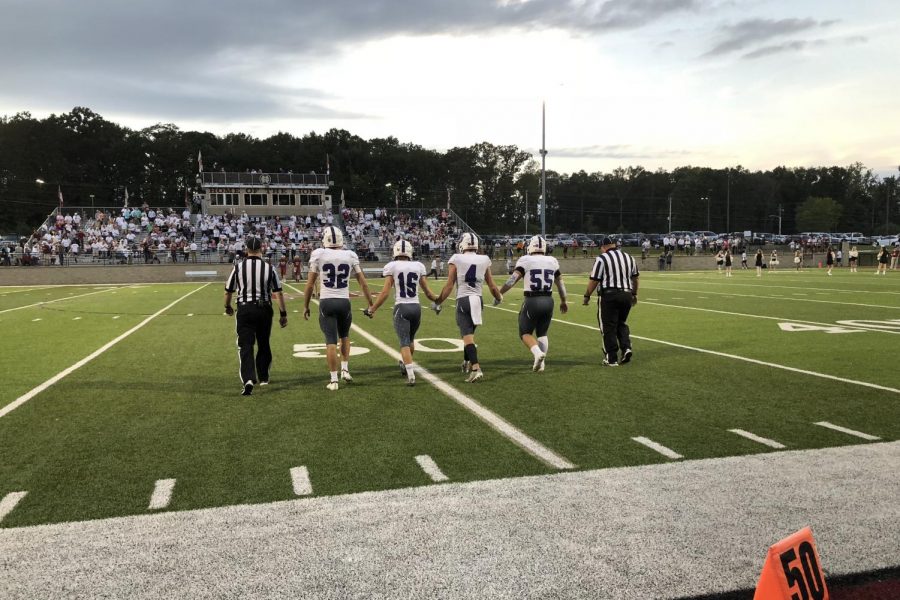 The #10 ranked Tigers faced the #1 ranked Christian Heritage Lions on Friday, Sept. 28 in hopes of bouncing back from a loss against Mt. Zion.

Darlington kicked off to the Lions to start the game, and a short return put the ball at Christian Heritage’s own 20 yard-line. A short pass for no gain was followed by a run up the middle that was stopped by junior defensive-tackles Tate Ratledge and Cade Brock for a loss of two.

Lions’ hopes for a third down conversion were stopped short by a broken-up pass by junior safety Kobe Nadu to force a punt to give possession to the Tigers.

A short punt return by sophomore Casey Gunn put the ball on their own 43 yard-line. Back-to-back rushes by junior running-back Kolin Rogers for little gain were followed by a quarterback keep by junior Frank Manning, all short of reaching a first down.

Ratledge’s punt bounced out of bounds at the one yard-line, and an immediate interception by Gunn put the ball back in Darlington’s hands, but an interception by the Lions led to a touchdown with 7:43 left in the first quarter.

Junior Alex Liddle’s kickoff was received deep in Lion territory and pushed out of bounds on their own 25 yard-line. A short reception was pushed out of bounds again by Nadu for no gain, and a personal foul called on Christian Heritage put them at second down with 25 yards to go.

A fumble recovered by one of their own lost the Lions five more yards, and a false start call put the ball on their own four yard line. Ratledge sacked the quarterback in the endzone for a safety, putting Darlington up 9-7 with 5:41 left in the first quarter.

Sophomore Demetrius Rogers’ return was pushed back to Darlington’s 45 yard-line following a holding call, but a personal foul against the Lions put the Tigers into Christian Heritage territory.

Short gains by Kolin Rogers and Wilcox were followed by a reception by junior receiver Gill Mauer to bring up fourth down with one to go for Darlington.

Wilcox was tackled in the backfield to bring up fourth and 30 for the Tigers, and the Lions recovered the ball on the 30 yard-line following an incomplete pass.

A 20 yard run by the Lions was followed by another fumble, this time recovered by the Tigers. An unsuccessful drive forced another punt by Ratledge, with the ball recovered on the 19 yard-line.

A sack by Ratledge and a tipped snap led to another sack by senior linebacker Cam Watson which led to a loss of five. An incomplete pass forced another punt with Gunn being taken down at the Lions’ 46 yard-line.

Back-to-back unsuccessful drives for both teams brought up a fair catch by Gunn at the Christian Heritage 48 yard-line with less than five minutes remaining in the half. Two runs earned the Tigers 16 yards, but a broken up pass brought up third down.

A sack was followed by a reception by Atha for a short gain, and Manning rushed into the endzone to put Darlington up 16-7 with two minutes left in the half.

“It [the game] was amazing, the energy was unlike any game I’ve ever played in. Everyone was very ready to play and the atmosphere was very loud,” Ratledge said.

A diving touchdown reception for the Lions shortened the Tigers’ lead with 30 seconds left in the second quarter.

A Darlington fumble recovered by Christian Heritage gave the Lions back the ball, but a broken up pass by Gunn ended the half with the Tigers up 16-14.

“Christian Heritage is a 90% throwing team and was ranked number 1 in the state. The DB’s [defensive-backs] had to know their assignments like the back of their hand last week and read their keys. We were actually excited for the throwing game and our defense played lock down,” Wilcox said.

Darlington received the kickoff to start the third quarter, but unsuccessful drives for both teams ended with several runs up the middle by Christian Heritage, slipping through the fingers of the defense for a rushing touchdown with less than a minute remaining in the third.

The Tigers began the fourth quarter down 16-21, and a first down reception by senior wide receiver Barrick Wade gave Darlington much-needed offensive momentum, followed by a touchdown reception by Gunn. A successful two point conversion caught by Wade put the Tigers up 24-21.

A fourth and out series for the Lions gave the ball back to Darlington, and the Tigers ran the clock out for a win against Christian Heritage, adding another win to their record at 5-1.

The Tigers will face Trion following a bye week in another home region game on Friday, Oct. 12.