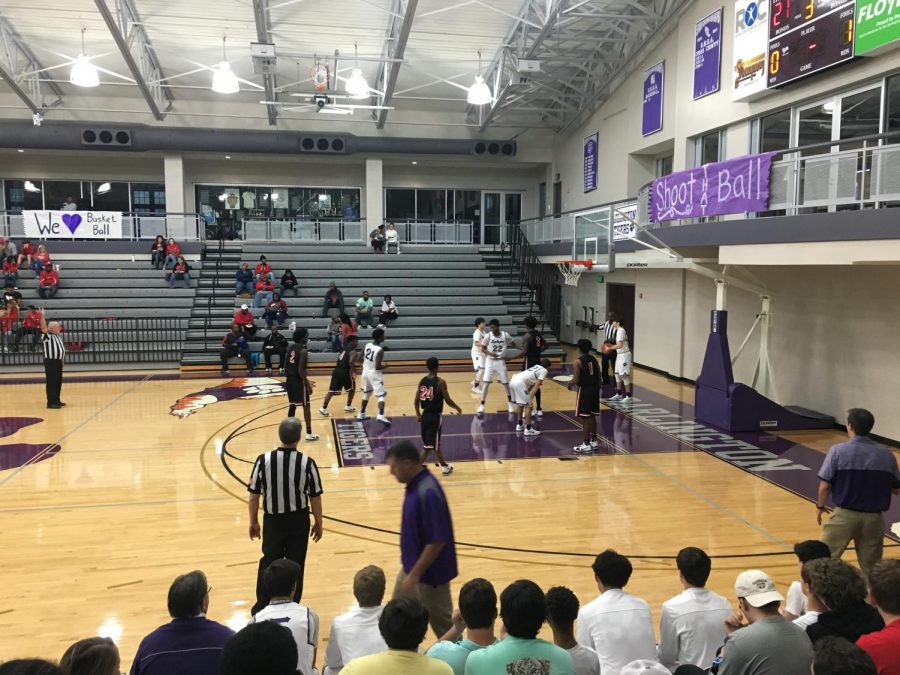 The boys varsity basketball team faced the Cedartown Bulldogs on Saturday, Dec. 2 following a win against First Presbyterian Day School the night before.

The Tigers came out strong, leading early in the first quarter following a no-look pass from junior Barrick Wade for a basket from junior JD Hull, making the score 10-3. Wade came back with a three-pointer, increasing Darlington’s lead to 13-3.

Cedartown fought back with a three and a free throw of their own, cutting into Darlington’s lead with a score of 13-7 seconds before the beginning of the second quarter. The Bulldogs squeezed in another jumper to end the first quarter with the Tigers leading 13-9.

Sophomore Hank Crawford kept the tempo high, beginning the quarter with a steal. Defensive stops for both teams kept the score at a standstill for the first half of the quarter. The Bulldogs broke the ice with a three-pointer, making the score 13-12. Cedartown hustled hard, going on a 9-0 run, taking the lead from Darlington with a score of 21-13.

“I think we need to improve on our boxing out and focus. The challenges we had from Cedartown were their athleticism and their hustle. They beat us to the rim pretty often, which allowed them to get a lot of second-chance baskets,” senior Andrew Freeman said.

Junior Andrew Land answered with a three-pointer of his own, bringing the Tigers back into the game. The Tigers and the Bulldogs battled throughout the remainder of the half, finishing it with Cedartown leading 27-21.

Efforts from both teams, including a jumper from Cedartown and a made free throw from Freeman, increased the score to 29-22 with the Bulldogs still in the lead.

A three-pointer by Land allowed Darlington to cut deeper into the deficit, making the score 29-25. An and-one by Cedartown increased their lead to 32-25. Free throws and field goals by Hull and Wade tied the score 32-32 entering the fourth quarter.

The Bulldogs broke the tie with a three-pointer at the start of the fourth quarter, but a jumper from senior Sam Tackeberry kept Darlington close with a score of 35-34. A fast break layup by Wade gave the Tigers a lead of one point.

Steals by junior Eli Brooks and Wade kept the ball in Darlington’s hands. A foul by Cedartown put Darlington in the bonus. Brooks nailed the first free throw, and an unsportsmanlike technical foul was called on Cedartown to put Land at the line to shoot two more. He made both, increasing Darlington’s lead to 39-35.

Another technical foul on Cedartown put Land back at the line, hitting one free throw and adding another point to the scoreboard for the Tigers. Back-to-back layups by Cedartown cut Darlington’s lead to one point with a score of 42-41.

The Bulldogs took the lead with a three-pointer, but a three by Wade brought the lead back into Darlington’s hands. A layup by Cedartown gave the Bulldogs the lead again, with a score of 46-45. A foul by Darlington in double bonus allowed Cedartown to increase their lead by two with two made free throws.

“Although it was a game we should’ve won, I feel like we’ll definitely bounce back from it. Fortunately for us, it won’t impact our region record,” Tackeberry said. “At the end of the day, we’ll forget about the loss, learn what we can from the film, and apply what we’ve learned the next time we step out on the court.”

The Tigers will face the Gordon Lee Trojans on Tuesday, Dec. 5, in their first region game of the year.

“We had a big win on Friday night against First Presbyterian, and then suffered a tough loss on Saturday versus Cedartown. We plan to learn from the loss, and use it to get better in practice this week,” head coach Bradley Pierson said. “It’s a very long season and we simply need to stay committed to the process of getting a little better each day.”