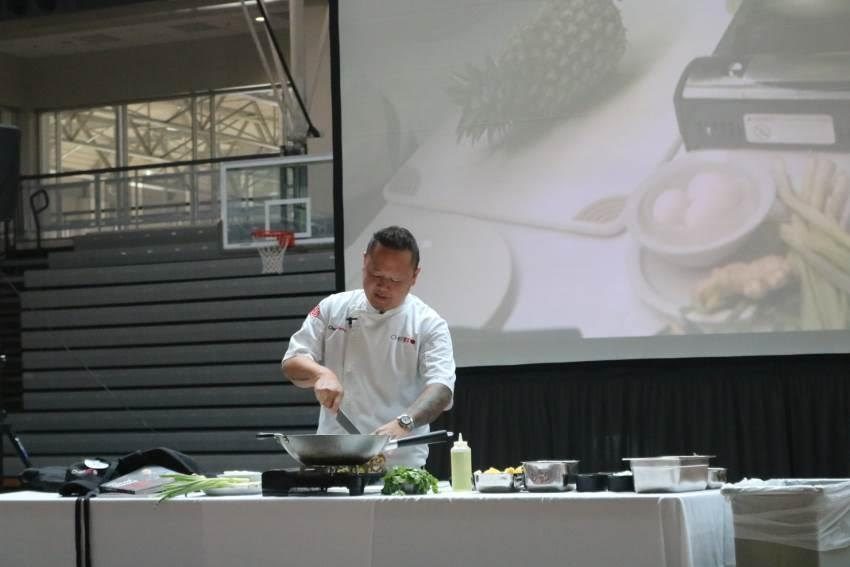 Chef Jet Tila, a celebrity judge from Cutthroat Kitchen, Cooks Vs. Cons, Chopped and more visited our school thanks to our dining services, Flik Independent School Dining. Tila performed a live demonstration of his cooking skills for grades six through eleven.

Students were given an exclusive opportunity to experience Thai dining from Tila. He showed us step-by-step how to make Pineapple Stir Fry with the five main flavors of Asian cuisine: sour, sweet, salty, savory and hot.

“I liked learning about how something we think is so similar to something, is different in many ways,” sophomore Tate Ratledge said.

Tila has written a cookbook called 101 Asian Dishes You Need to Cook Before You Die. This cookbook, along with other prizes such as aprons and hats, were given away to the audience in a series of trivia questions from the presentation.

“I thought his cooking demonstration was really cool, and it was really interesting learning more about Thai culture from him. It’s super cool that he grew up around Thai culture and cooking,” sophomore Emily Prusakowski said.

Tila’s family moved to America in 1966 and opened one the first Thai markets in L.A, and he now serves as the Culinary Ambassador of Thailand.

“Meeting Chef Jet was a really cool and unique experience. He was very professional and entertaining to watch. At the end of his cooking demonstration, he gave students a chance to win some of his merchandise by answering some questions correctly. I answered a question about Flik, our food provider, and won a hat. He even signed it later at lunch,” junior Morgan Ivester said.

After the presentation, lunch was a special treat made by Flik and Tila. The main course was pineapple stir fry, and there was also an interactive noodle bar. During both lunches, Tila gave out personalized signatures, pictures and merchandise to the students and faculty.