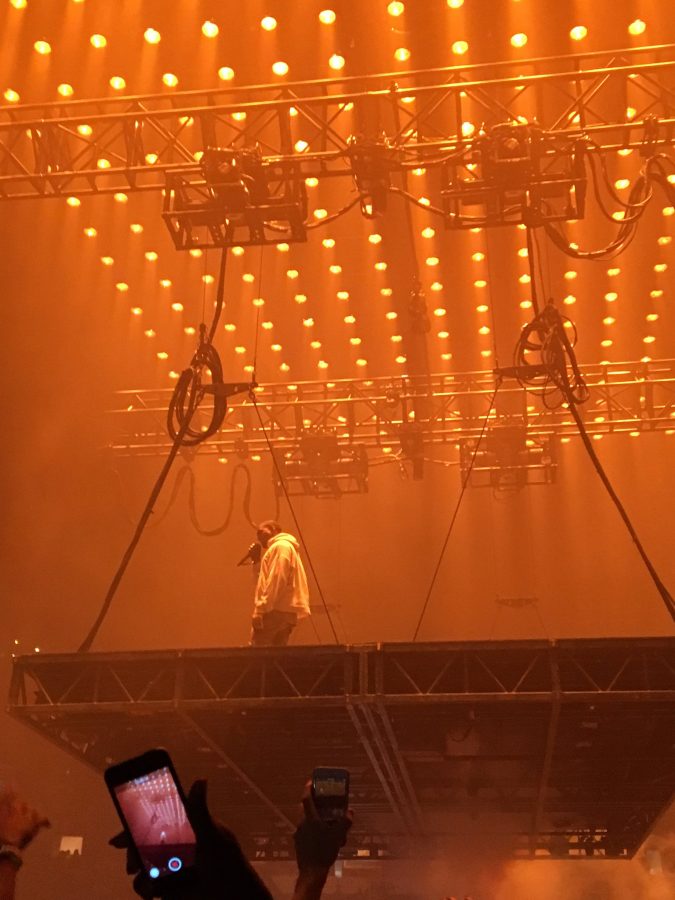 Kanye West on stage at his show in Atlanta

Atlanta was rejuvenated in way that only happens when an artist is in the city. Fans crowded the streets and jostled their way into Philips Arena. The wait was endless, and it seemed as if you were waiting in line forever. We waited 30 minutes for merchandise and paid  $40 for tour shirt, a stamp of the chosen ones, that would inevitably make everyone jealous the following day.

The concert began a hour later due to the opening act, Desiigner’s, recent incarceration. The breathless nervousness was evident throughout the crowd as Kanye stepped onto the metal platform and  slowly raised over us as a God looks over his sons and daughters. We were his disciples, all donned in his fashions, eccentric  people with creative minds in sync with his own.

The wait was finally over, and no one could prepare us for the journey to come. As the opening chords of Father Stretch My Hands pt. 1 began, energy exploded across the arena. Not a single person was in their seats; there was constant movement; and every lyric was sung. In that moment, it felt as if everyone in the world knew what would happen if “Young Metro Don’t Trust You.” Everything felt synchronous and connected, yet each individual distinct. The mosh pit was pulsating and illuminated as West glided over them. It was the ultimate fan experience, and in a room full of people, Kanye managed to maintain a sense of intimacy the duration of the night. Whether you were in the pit or in the farthest balcony, the connection between you and Yeezus felt real.

Kanye revealed the layers to his soul and his music by performing an assortment of throwbacks from his debut album, College Dropout, to his most recent album, The Life Of Pablo, throughout the night. The growth of his sound across the years was apparent and celebrated as he used “I Love Kanye” as a transition between “Runaway” and “Waves,” two songs from very different periods of his music. “I Love Kanye” sends a clear message that Kanye knows his followers notice that he is constantly evolving, whether it is for better or worse.

It was the simplicity of it all that made it so beautiful. There was no extravagant flashing lights, back-up dancers, or costume changes. It was truly just West in his raw form, and we were just the lucky few who got to listen in on his wisdom. He began speaking to us, and he encouraged to follow our dreams. Yeezus told us, his loyal followers, to forget the people who try and define us and tell us we can’t accomplish our dreams. He urged us to relish our bad ideas because the ideas that are outrageous, abnormal, and simply just unearthly are the only ones he thinks are worth listening to. Then he proceeded to serenade us to “Runaway,” which is when the tears fell. Being surrounded by people like me, other nonconformist and free thinkers, and being in the presence of the man who inspired me to be this way simply brought me to tears.

The night ended with “Ultralight Beam,” a symphony of emotion, sentiment. A song about faith, love, and passion made it perfect to end with. . It was not a concert; it was work of art; and most simply put, it was the most beautiful thing I’ve ever been apart of. Leaving the arena, I felt blessed, blessed to have been in the presence of such a genius, sacred, divine human being.