Review of Little Mix’s Get Weird 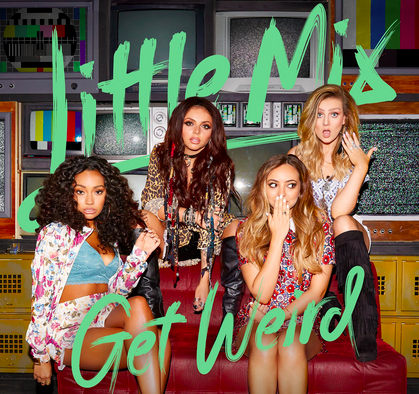 Little Mix, the first girl group in UK history to ever win on the hit show “The X Factor”, has become an established part of the music scene all over the world. They’ve smashed the Spice Girls’ chart debut record, as far as British female groups, sold 12 million copies of their two previous albums, not including their sells from their recent album Get Weird, and have yet to reach their peak.

Before Get Weird was even an idea, they wrote a complete album and then decided to scratch it because they thought it wasn’t good enough. They did, however, sell one song from this disposed album to Britney Spears (featuring Iggy Azalea), “Pretty Girls”.

This album is much different from their last album, Salute, which was very dark, grungy, and heavily influenced by R&B. Get Weird is ‘80s inspired, colorful, and personality driven.

When it came to writing Get Weird, these girls pulled all the stops. They worked with Jess Glynne to write “Grown”, Jessie J. when writing “Clued Up”, and had Jason Derulo feature on “Secret Love Song Part I”. This album also includes two acapella tracks, “The End” and “The Beginning”, which is really different from most albums of today, but they seem to be all for trying new things. For example, in their new music video for “Black Magic”, they decided to act for their first time as a group. They liked it so much that they all acted again in their second single “Love Me Like You.”

I was very impressed with this album and it’s ability to successful introduce Little Mix music by way of differing platforms, like their singing in Latin for the song “Lightning”.

Unlike their last two albums, their solos are split up more evenly among the girls throughout Get Weird. Overall, I think this is their best album yet and I cannot wait to see what else they will bring to the music industry.