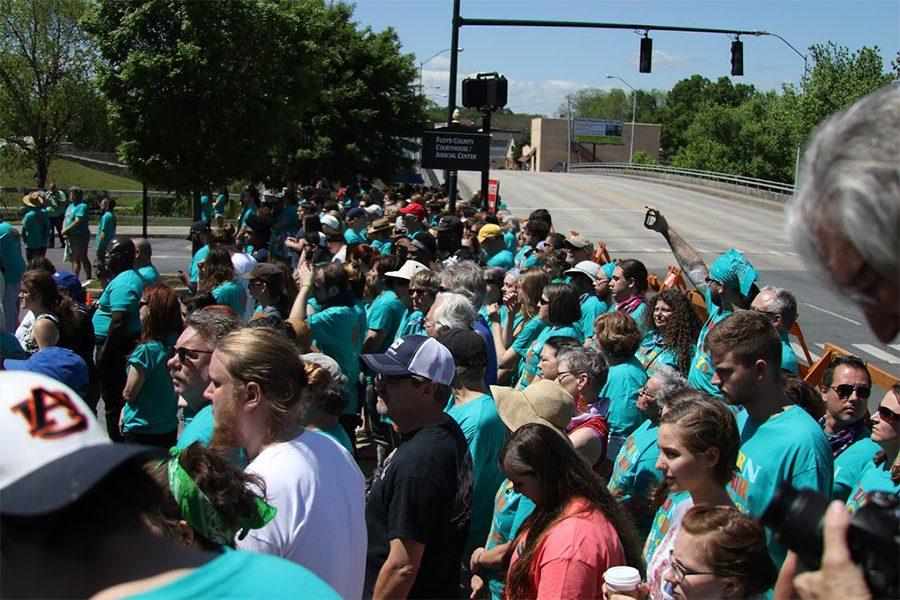 Protestors "turn their backs on hate."

Protesters in Rome, Ga., outnumbered the white-pride groups to show unity and tolerance.

Starting at 1 p.m., T-shirts with the protest’s slogan, “Turn your back on hate,” were distributed. According to protest organizer Jessie Reed, there were 375 T-shirts sold. To receive the shirt, the protestors had to agree to stay peaceful and quiet throughout the protest.

“It really opened my eyes because I did not think there were people that still thought that way in 2016,” sophomore Emily Edwards said. “I was glad I was able to show that I disagreed with their beliefs through such a peaceful protest, and I’m glad we left when we did because of how violent things got in Stone Mountain. I’m glad that we were able to make sure we didn’t participate in anything like that.”

At 1:45 p.m., the leaders of the peaceful protest made their announcement. After warning the protesters about the events in Stone Mountain earlier in the day, the leaders made sure to remind everyone to stay peaceful no matter what was said.

“No matter what happens, we stay quiet, we stay true, we stay peaceful, we stay committed,” Reed said.

At 2 p.m., the protesters made their way to the police blockade that was set up. After about 30 minutes of waiting, the white-pride groups marched out to the Law Enforcement Center. The white-pride groups were adorned in traditional KKK and National Socialist Movement gear and carried confederate flags, swastikas and signs promoting their organizations. They began chanting, “white power,” “white lives matter most,” “this is our home, yours is across the ocean” and many other remarks. The whole time, the protesters stayed silent.

“It was incredibly successful because everyone that came stayed silent and peaceful except for a few chuckles when they said ridiculous things,” Reed said.

“I think it was very important to show them that Rome wasn’t a city that was going to tolerate their discrimination and their hate,” freshman Marissa Joseph said. “I think that message was delivered clearly.”

Read more about the planning of the protest here.